What Americans Will Really Dislike About 'Trumpcare' 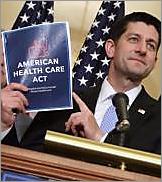 An article in the Washington Post co-authored by University of Minnesota health policy professor Sarah Gollust analyzes the bill that passed the US House of Representatives last week. Gollust and her co-researchers conducted a national survey in March asking 1,588 Americans what they knew about the Affordable Care Act (ACA, also known as Obamacare) and the proposed American Health Care Act (AHCA, also known as Trumpcare), whether their views of these programs were favorable or unfavorable, and how completely they understood each. The results? Among those surveyed, even those who were aware of the ACA requirement to purchase insurance or pay a penalty prefer the ACA to the AHCA. Of particular concern regarding the AHCA was its penalty for enrollment gaps, fines that would be paid to insurers. The authors conclude the enrollment gap could be used as an additional line of attack by anti-AHCA activists, noting "the public is already concerned about protections for people with preexisting conditions, huge cuts to the Medicaid program, and citizens losing insurance. Highlighting the AHCA’s coverage-gap penalty could drop public support further."