Professor Gazzaniga's work focuses on how the brain works and produces ideas, including morals. Gazzaniga has brought his work on brain function to many people through his numerous books and his participation in several public television specials. He also sits on the President's Council on Bioethics. Professor Gazzaniga's lecture on "The Ethical Brain" explained how neuroscience contributes to our understanding of everyday ethical issues, such as whether an embryo has the moral status of a human being. He argued that neuroscience has little to say about concepts such as free will and personal responsibility. However, cognitive neuroscience does suggest how brain research will instruct us on universal morals possessed by all members of our species. This fundamental development will find cognitive neuroscience becoming central to the modern world's view of ethical universals. 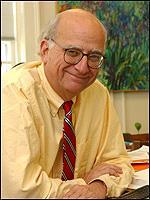 Michael Gazzaniga, the David T. McLaughlin Distinguished University Professor and Director of the Center for Cognitive Neuroscience at Dartmouth College, received his Ph.D in Psychobiology from the California Institute of Technology. His work has advanced our understanding of functional lateralization in the brain and communication between the cerebral hemispheres. He has brought his work to a lay audience through his many books and his participation in several public television specials that make information about brain function generally accessible. He has recently edited the third edition of a book containing the work of nearly 200 scientists that is recognized as the sourcebook for neuroscience, and has just published The Ethical Brain (Dana Press). Dr. Gazzaniga has begun and developed Centers for Cognitive Neuroscience at the University of California-Davis and at Dartmouth, and founded the Neuroscience Institute and the Journal of Cognitive Neuroscience. Dr. Gazzaniga is prominent as an advisor to various institutes involved in brain research, and is a member of the President's Council on Bioethics.