The conference included sessions providing background information in nanobiotechnology and existing oversight systems. The investigators then presented their recommendations, and a panel of experts provided input before opening up the discussion to the audience. Break-out sessions focused on nanoethics, risk assessment, public engagement, and law and regulatory approaches. This conference presented the findings and recommendations from an National Science Foundation-funded project on "NIRT: Evaluating Oversight Models for Active Nanostructures and Nanosystems: Learning from Past Technologies in a Societal Context." The project assessed five historical oversight models--for drugs, devices, gene transfer, genetically engineered organisms in the food supply, and chemicals in the workplace — using a comparative approach, and developed recommendations for future nanobiotechnology oversight. The conference assembled a multi-disciplinary group of investigators with strengths in nanotechnology research and development, public policy, law, health, environment, economics, and bioethics as well as collaborators representing a range of perspectives who presented their findings to key leaders from related oversight agencies and the public. 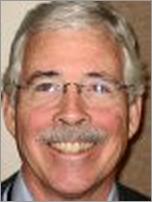 David Chittenden, MS, is the Vice President of Education at the Science Museum of Minnesota where he oversees one of the largest and most successful science museum-based education programs in the country. He has extensive experience in museum education as developer and project director for major statewide and international exhibit and education projects funded by such agencies as the National Science Foundation, the Kellogg Foundation, and the Howard Hughes Medical Institute. He has participated in and presented at numerous national and international conferences and workshops on the public understanding of research. 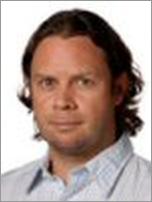 Michael Cobb, PhD, is an Associate Professor in the Department of Political Science at North Carolina State University. A specialist in survey research, Dr. Cobb's research and teaching interests include such issues as the effects of deliberation on emerging technologies, campaigns and elections, race, and war. The recipient of two teaching awards, he has also worked to improve the election process in North Carolina. Dr. Cobb holds a PhD and MA in Political Science from the University of Illinois at Urbana-Champaign and a BA in Political Science from the University of California at Santa Cruz. He has been at NC State since 1999. 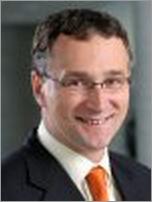 Mauro Ferrari, PhD, is Professor & Director, Center for NanoMedicine, Brown Foundation Institute of Molecular Medicine; Chairman, Department of Biomedical Engineering, University of Texas Health Science Center at Houston; Professor of Experimental Therapeutics, University of Texas M.D. Anderson Cancer Center; Professor of Bioengineering, Rice University; and President of the Alliance for NanoHealth, Houston TX. Dr. Ferrari is a founder of biomedical nano/micro-technology in biomedical applications with more than 160 peer-reviewed journal articles, six books, more than 20 issued patents and about thirty more pending in the US and internationally. Dr. Ferrari served as Special Expert on Nanotechnology at the National Cancer Institute in 2003-2005, providing leadership into the establishment of the NCI's Alliance for Nanotechnology. 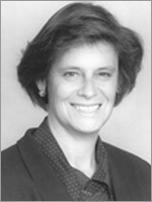 Susan Foote, JD, MA, is Professor Emerita, School of Public Health, University of Minnesota. She was an associate professor at the Haas School of Business, UC-Berkeley, from 1982 to 1993 and in 1990, she served as a Robert Wood Johnson Foundation Health Policy Fellow and subsequently as Senior Health Policy Analyst in the office of U.S. Senator Dave Durenberger. She serves as co-director of the Medical Technology Leadership Forum. 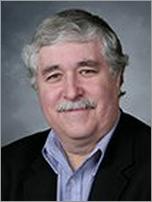 Ralph Hall, JD, is a Professor of Law, University of Minnesota Law School. He specializes in food and drug law. He is also Counsel at Baker & Daniels, an Indianapolis law firm specializing in drug and medical device law, and CEO of a medical device start-up company, MR3 Medical LLC. 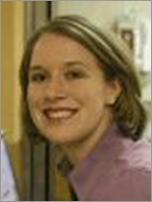 Christy Haynes, PhD, is a McKnight Land-Grant Assistant Professor, Chemistry, University of Minnesota. Her research focuses on fundamental and applied problems in immunology, nanoscience, and environmental science using a diverse set of techniques, with applications ranging from drug delivery to environmental sensors. She combines knowledge of nanoparticles and biological cells to investigate the potential cytotoxicity of nanoparticles in consumer products. 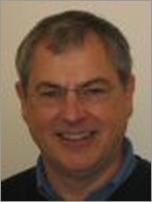 Robert Hoerr, MD, PhD, is the President and CEO, Nanocopoeia, Inc. Nanocopoeia is a Minnesota-based nanotechnology start-up, a drug formulation company bringing a proprietary ElectroNanoSpray™ technology for producing nanoparticles to the pharmaceutical and medical device industries. 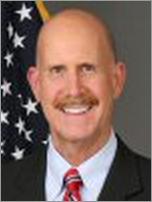 John Howard, MD, MPH, JD, LLM, is the current Director of the National Institute for Occupational Safety and Health (NIOSH) in the U.S. Department of Health and Human Services in Washington, DC, a position he also held from July, 2002 to July, 2008. He was also Coordinator of the World Trade Center Health Programs of the U.S. Department of Health and Human Services from 2006-2008. Prior to his appointment as Director of NIOSH, Dr. Howard served as Chief of the Division of Occupational Safety and Health in the California Department of Industrial Relations from 1991 through 2002. 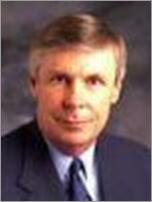 Robbin S. Johnson is the President, Cargill Foundation and Senior Policy Advisor, Global Policy Studies, Humphrey Institute of Public Affairs, University of Minnesota. He is the former Senior Vice President and Director of Corporate Affairs at Cargill, Inc. In that role he worked with Cargill’s senior leadership team on public policy and communications strategies. Johnson was involved in the development of the first APEC Food System proposal ten years ago and worked with ABAC members to advance its recommendations. 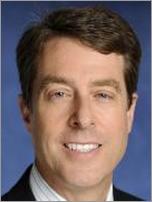 Jeffrey P. Kahn, PhD, MPH, is the Director of the Center for Bioethics and the Maas Family Chair in Bioethics; Professor, Department of Medicine, University of Minnesota Medical School; Division of health Services Research and Policy, School of Public Health; Department of Philosophy, University of Minnesota. Dr. Kahn works in a variety of areas of bioethics, exploring the intersection of ethics and public health policy, including research ethics, ethics and genetics, and ethical issues in public health. He has served on numerous state and federal advisory panels including the National Institutes of Health (NIH) Recombinant DNA Advisory Committee (RAC). 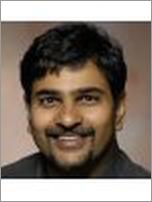 Milind Kandlikar, PhD, is an Associate Professor, Liu Institute for Global Issues, University of British Columbia. His work focuses on the intersection of technology, human and the global environment. Dr. Kandlikar's current projects include: risks and benefits of nanotechnology; cross-national comparisons of regulation of agricultural biotechnology; air quality in Indian cities; ethics of clinical trial research in the developing world; and new technologies for sustainable transportation. 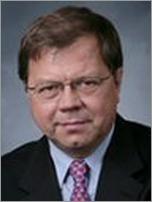 Bradley C. Karkkainen, JD, is a Professor of Law, University of Minnesota Law School. He is a nationally recognized authority in the fields of environmental and natural resources law. His research centers on innovative strategies for environmental regulation and natural resources management, with an emphasis on mechanisms that promote continuous adaptive learning, flexibility, transparency, and policy integration. 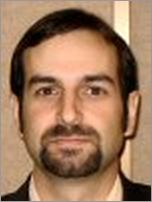 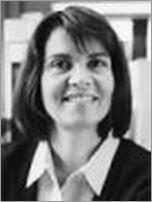 Efrosini Kokkoli, PhD, is an Associate Professor in the Department of Chemical Engineering & Materials Science, University of Minnesota. Kokkoli’s research focuses on engineering peptide-amphiphiles and designing nanostructured interfaces that can specifically target adhesion molecules in pathological areas of interest with a subsequent release of the load (peptides, proteins, or genes) to the nucleus of the cell. 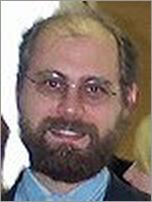 George Khushf, PhD, is an Associate Professor in the Department of Philosophy at the University of South Carolina. He has written extensively on medical ethics and served as the managing editor of the Journal of Medicine and Philosophy. He is also the Humanities Director at the Center for Bioethics at USC. His current research focuses on moral philosophy and general bioethics, organizational ethics, philosophy of medicine, theological dimensions of ethics, and ethics of nanotechnology. 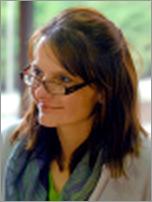 Jennifer Kuzma, PhD, is an Associate Professor, Humphrey Institute, University of Minnesota. Prior this position, she served as study director for several U.S. National Academy of Sciences reports related to biotechnology, biosafety, and bioterrorism and as an American Association for the Advancement of Science (AAAS) Risk Policy Fellow at the U.S. Department of Agriculture where she worked on risk analysis for human health and environmental hazards. Her current research focuses on risk and oversight policy for bio- and nanotechnology. She has served on Minnesota’s Governor’s Biosciences Advisory Committee, Board of the Biobusiness Alliance of MN, Executive Committee of the International Society for the Study of Nanoscience and Emerging Technologies (S-NET), Social and Ethical Issues (SEI) Advisory Board of the U.S. National Nanotechnology Infrastructure Network (NNIN), and the UN WHO-FAO Joint Expert Meeting on the Applications of Nanotechnologies to the Food and Agriculture Sectors. 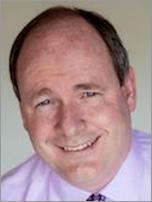 Gary Marchant, JD, MPP, PhD, is a Professor of Law and Executive Director & Faculty Fellow in the Center for the Study of Law, Science, & Technology, and Lincoln Professor of Emerging Technologies, Law & Ethics at Arizona State University. 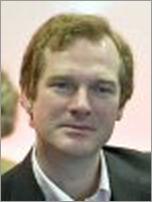 Andrew Maynard, PhD, is the Chief Science Advisor, Project on Emerging Nanotechnologies, and Science Advisor to the Synthetic Biology Project, Woodrow Wilson International Center for Scholars. An established scientist and experienced communicator, he is well known for his work on exploring, crafting and implementing effective approaches to developing new emerging technologies safely. He is considered one of the foremost authorities on the safe development and use of emerging nanotechnologies. 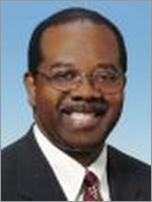 Terry L. Medley, JD, is Global Director of Corporate Regulatory Affairs, DuPont Environmental and Sustainable Growth Center. He is recognized internationally as an expert on biotechnology, nanotechnology and environmental regulatory matters. His leads the DuPont Nanotechnologies Safety Health and Environment Advisory Team. He served as the DuPont project lead for development of the June 21, 2007 Environmental Defense Fund-DuPont Nano Risk Framework document for the responsible development of nanomaterials. He is the Chair of the American Chemistry Council’s Nanotechnology Panel and Chair of the Business Industry Advisory Committee (BIAC) delegation to the Organization for Economic Co-operation and Development (OECD)’s Expert Group on Nanotechnology. He is also a member of the International Council on Nanotechnology (ICON)’s Steering Committee. 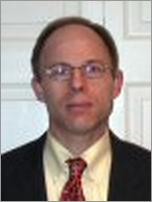 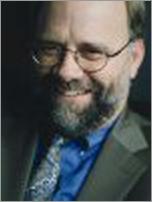 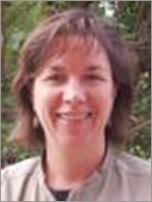 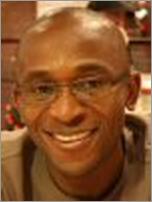 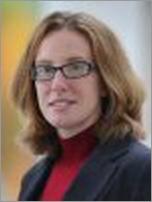 Jordan Paradise, JD, is an Associate Professor, Seton Hall University School of Law. She researches and publishes on the legal, ethical, and social implications of emerging science and technologies such as genetics and nanotechnology. 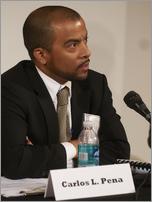 Carlos Peña, PhD, MS, a Senior Science Policy Advisor in the Office of the Chief Scientist, within the Office of the Commissioner at the FDA. He currently serves a lead role in the development of the agency's approach to science, policy, and research needs for nanotechnology. His position involves service on the FDA Nanotechnology Task Force composed of key officials across the agency and establishing and enhancing partnerships with national and international regulatory agencies as well as other stakeholders focused on nanotechnology. 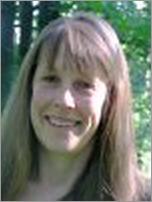 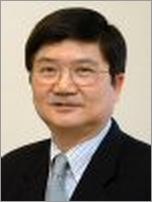 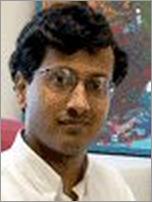 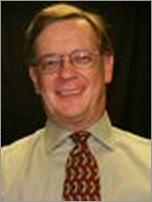 Steve Suppan, PhD, is Director of Research, Institute for Agriculture and Trade Policy (IATP). Since 2002, he has been the U.S. co-chair of the trade working group of the TransAtlantic Consumers Dialogue. He has been IATP's main liaison to Consumers International and has served on several Consumers International delegations to the Codex Alimentarius Commission and to Codex committee. He has written extensively on food safety policy and on agricultural trade policy. 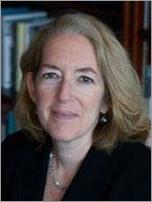 Susan M. Wolf, JD, is a McKnight Presidential Professor of Law, Medicine & Public Policy; Faegre & Benson Professor of Medicine; Faculty Member in the Center for Bioethics; Director of the Joint Degree Program in Law, Health & the Life Sciences; and Chair of the Consortium on Law and Values in Health, Environment & the Life Sciences at the University of Minnesota.

Continuing Education Units
Approved for 6.5 standard CLE credits. Event #141994.
This event has been designated by the Office of the Vice President for Research to satisfy the Awareness/Discussion component of the Responsible Conduct of Research (RCR) continuing education requirement.